The following biographical information is derived from Gretchen Ann Groth's biography on Lucille Cedercrans “Luminous Sitting, Torturous Walking”. The biography is a mixture of prose and poetry, texts written by Lucille Cedercrans herself, texts written by Gretchen Ann Groth and communication from Master R. The book also contains contributions from Lucille's friends and students.

Gretchen Ann Groth's biography is highly recommended if you want to know more about Lucille Cedercrans, her life and the way her books came to be. 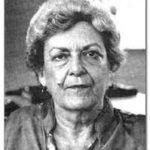 The little Lucille did not have a happy childhood. Her parents always quarreled and whenever she could, she enforced staying with her grandparents. Her parents divorced when she was nine years old.

She did not complete high school and she had been married three times before she turned 21. When she first got in touch with "The Presence", as she herself called her connection to Master R, she was 27 years old, married to a milkman and mother of five children less than 10 years of age.

At a much later time, Master R informed her that: “The early years, difficult though they were, were a kind of protection, a protection for the sake of your function. You were shielded from many of the socialization and conditioning factors imposed upon the minds, hearts, and brains of those members of humanity who are its leaders and the apparent shapers of its destiny”. (Biography, page 225)

There is a fine story in Gretchen Ann Groth's biography of how Lucille meets the Presence. One day she sits exhausted in her rocking chair when suddenly her mind opens up and merges with “a Presence” and becomes one with it. It is expansive and yet peaceful. She is infused with thoughts and ideas and concepts, and with answers to questions she had never even known to ask. She is completely unprepared and knows nothing of such experiences. There was not at that time a general understanding in society of that kind of spirituality, so she had nothing with which to compare her experience. She had minimal formal education and no religious training, and knew nothing of Theosophy or Alice Bailey.

Despite the strange situation, she accepted the training suggested by this Presence. From then until 1962, she generated the material that makes up her authorship. "The New Thought Form Presentation of the Wisdom", as she herself often calls it.

After this first contact, she set aside time each day to practice her connection with the Presence. In the beginning, she heard the directions as words. Soon, however, she did not have to "hear" to understand what was "said".

In Lucille’s own words (Biography page 13):

The communication is very subtle.
I do not hear voices
There is no trance.
There is only a Presence who gives me his knowing.
I must put it in words that are appropriate – sometimes
it is difficult – for there are no proper words to explain.
There is energy with the Presence, and laughter and love and
great joy.

The year after this experience, she offered her first meditation class. After that followed in quick succession: Forming of groups and centers various places in the United States, offering classes, and writing down material. The material consisted partly of lessons and partly of shorter articles.

Simultaneously with this focused work, doubt was ever present in her life. All the time she worked with Master R, she often doubted the existence of the masters, the existence of the Hierarchy. She doubted as well her own role as "Station" and how she, an insignificant housewife without education, could be “speaker” for them. It might all be a result of wish, desire or just “plain ole’ delusion”.

In addition, there was the guilt and regret for not being the wife and mother that her husband and children could expect. Her primary focus was to pursue her spiritual path.

Finally, she experienced a tremendous pressure to perform, to bring through new projections, from the members of the groups she formed. She formed groups in many different places in the United States. In the period from 1952 to 1962, she thus moved no less than 7 times. Maybe the many relocations can be seen as an expression of regular escape from this pressure.

Lucille understood her function with Master R as creating a "body receptive" for the ageless Wisdom in the West, so that the "Masters" (often specified as the Tibetan masters) could later step forward and “in person” teach the Wisdom. In particular, The Nature of the Soul was created as a transition and bridge from the Judeo-Christian framework to the spiritual concepts of Buddhism and Hinduism.

In 1962, Lucille left her groups, her teaching, and her projections with Master R, and moved to Spokane, Washington to run a restaurant with her husband.

In 1965, she was offered a job at the University of Michigan as a research assistant for the development of an elementary and high school social science curriculum.

When this program ended in 1972, Lucille's former activity as a teacher of meditation and spirituality surfaced. A new group was formed, but soon the former doubts and resistances also surfaced, and she moved - or fled – once again to new work.

In the winter of 1972, she developed acute rheumatoid arthritis. Shortly afterwards, the arthritis became so severe that she was granted a permanent disability pension. For the last 12 years of her life, she suffered constant violent and painful health problems.

In 1973, Lucille got into contact with Tibetan Buddhism. She participated in a 7-week development program at Tarthang Tulku Rin-poche, at the Nyingma Institute, Berkeley California.

She writes herself about this experience:

“Tarthang Tulku said this summer program would clear my doubts about my bringing through communication. …

As the sessions continue, I notice that TT teaches with different energies at different times. … I suddenly recognized that TT is actually presenting as several of my contacts. …

Now either TT is “bringing through” these Masters or something else is going on. Because Rinpoche apparently is one of the Masters for whom I was preparing the ground, it seems a tad unlikely he would be using the same process I used. No, I don’t think that he is bringing through these Masters in the same way that I did. My guess is that the energies of the different Masters (R, M, DK, HK and so forth) are universal energies that appear in a form relevant to the situation and individuals. A Master as identified in Bailey’s books, or that I experienced, may in fact be one of the deities in Tibetan Buddhism. …

If presenting as Guru Rinpoche, Master R, or Master DK, will help people’s spiritual growth, then these are beneficial appearances. Buddhist practitioners’ meditate on the deity in order to eventually embody the energy wisdom of that deity. NTFPW students practice the meditative forms and incorporate the wisdom teachings as presented by Master R in my earlier meditation materials. Within the Tibetan Buddhist context, the energy is Padmasambhava. Within NTFPW, it is Master R. Thus there is no conflict; different pathways of spiritual development for different folks. No conflict at all”.

After this, Lucille was soon authorized to teach within Tibetan Buddhism. She even got the blessing of the supreme lama to develop her very own approach. From 1973 until her death in 1984, she taught this tradition – once more in several different places in the United States.

However sad or strange it may seem it is a part of the description of Lucille Cedercrans' life that she exhibited a very strange behavior, or side of herself, as her illness became worse. She wore up her helpers with completely exorbitant demands for attention and help. At the same time, a thorough clinical examination of her showed that she would be fully capable of doing most things herself.

It challenges anyone who reads the biography of her. But then again, it must have challenged those who voluntarily took upon them to care for her around the clock even more. Was she simply unreasonable, and would it really be better to let her take care of herself? Was it a last "lesson" she gave them that spirituality is not pure light and love, but also difficult realizations and hard work?

We will never know! During the last months, her system gradually gave up. She was cared for 24 - 7 by the group members, and her usual teaching of the group ceased.